And the Lord restored the fortunes of Job… also the Lord gave Job twice as much as he had before.

A little over a year ago when I lost my first daughter, I was so devastated. Yet just a couple of months before this incident, I had been speaking to a group of young people about God’s ability to restore.

I had to reel in my own words. I had told them that when God restores, He doesn’t only replace what is lost, but increases its original value. I was faced with a clear case of “practise what you preach.” Here I was faced with a situation that required me to visit my own notes. Those were very challenging moments. Talk is indeed cheap, they say.

So though in small proportions, I’m able relate with Job in believing that my new daughter is not only a replacement but a restoration in itself. A better version of what was lost. What more can I hope for, but better years ahead, because Job lived 140yrs extra to enjoy his hustle. 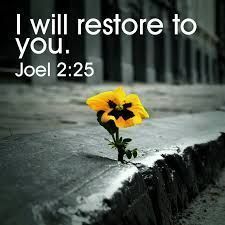 I write this to encourage all of you out there who have had major dents in your journey of faith. God restores, and if He hasn’t changed then that hasn’t too. Keep faith alive, He will restore your glory.